There was a time when DD national was the only source of entertainment for all Indian households. Later DD metro came and slowly Dish cable connection service ushered in our daily life. And then suddenly government introduced a set-top box to bring all dish cable service providers under tax regimes. This opportunity was taken a hand in hand by major business giants such as TATA, Airtel, Zee Networks and many more. These service providers snatched the significant share of local service providers but eventually provided a much better service even at the remotest location of the country.

The DTH service relies on the satellite which compresses the signals digitally, encrypts them and then is beamed from high powered geostationary satellites. They are received by dishes that are given to the DTH consumers by DTH providers. So technically you can use it anywhere on provided you have a subscription. There are totally three components that make this possible Set-Top Box, Dish Antenna &  Card.

Now that we have a lot of options in the DTH market it isn’t very easy to choose the best operator. Here in the below article, you will understand the pros and cons of the best DTH providers in India to make up your decision.

TATA sky is the result of a joint partnership of TATA group and 21st Century Fox (currently The Walt Disney Company) in 2006. It is undoubtedly one of the market leaders in DTH space with coverage all over India. With over more than 800 regional, national & International channels they provide specially curated packs for all kinds of demands. Tata sky was the very first to offer record and play service for watching at your convenience.

You can get extra cashback of Rs. 200 on new TataSky connection by going through these refer link. Refer Link 1 & Refer Link 1.

It comes with different kinds of set-top boxes such as standard definition(SD), High Definition(HD), High Definition Plus(HD+), Ultra High Definition(UHD) for rendering medium picture quality to very high definition. Recently Tatasky has launched Binge+ which converts any regular TV into the android TV so you will be able to run android apps simultaneously with live TV.

TATA sky unmatched customer service, multiple recharge option, Pay for what you watch, and three Year Annual Service Commitment makes it the best DTH provider in India. You can access TV channels also live with their android/iOS app or by visiting their website.

Airtel Digital TV is owned by Bharti Airtel which kicked off DTH service back in 2008. They offer 500+ channels including regional, national and international channels. They have a specially curated plan to choose and also custom channel options available. The set-top box comes in 3 different modes of connections

This is a setup that can convert easily any smart TV into Android TV. You can access over 5000 Apps with the Google Play Store – games, music, content and much more! You can experience 4K picture quality and also get the support of Google Chromecast. The best part is that a smartphone app can seamlessly control everything.

D2H videocon and Dish TV were separate entities before their merger in 2016. On 11 November 2016, the Board of Directors of Videocon d2h and Dish TV agreed to an all-stock merger of their DTH operations. The merger has created the largest DTH provider in India with a total valuation of ₹17,000 crores (US$2.4 billion). Brand name Dish TV Videocon Limited now runs it. Dish TV has a major share of 55.4% stake in the merged entity, while Videocon d2h owns the remaining shares.

Though being the same entity, they continued to run separately. They both have their separate plans and subscribers.

They boast of having the largest subscribers base With over 15 million subscribers, DishTV is India’s Most Trusted and Asia’s Largest DTH brand. Most affordable value packs start from Rs. 85 only, and claims to have 5 times better picture clarity which is good for your kids’ eyes. The built-in recording feature allows unlimited recording through USB.

With DishTV subscription, you can watch 1000+ hours of video content and live TV free with Watcho (android/iOS) mobile application. They have gone one step ahead by integrating Alexa with DishTV. They have proper guidelines on how to interact with Alex, which can be accessed on Amazon. You can find all kinds of SetTop boxes from SD to HD with a varying price range.

DishTV also has a similar product like TataSky and Airtel which is named dish smart hub, where you can bunch of stuff such as, 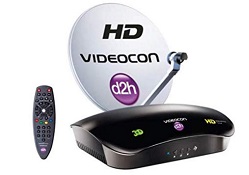 D2H comes with two types of Set Top boxes first is SD Set-Top box, and another is HD Set-Top box. They have some curated subscription plans, and you can also define your own plan according to your needs. Customer service is not so responsive these days, especially after the merger.

D2H lets you play true 4K videos and allows you to record live channels to watch it later on your convenience, you can even schedule the recording.

A mosaic feature which is a kind of unique feature where d2h has the unique facility of being able to show you 12 programs of a particular genre on your TV screen, at one go. This allows you to select a particular program that you wish to watch.

You can cast your mobile screen easily onto the bigger screen in addition to that you can enjoy the pleasure of surfing through the channel with your mobile by converting your phone into a remote with the Smart remote connect feature.

Nitesh Rajputhttp://techscanner.in
I Love technology and the way it is transforming our lives, call me a geek!! Apart from that, I spend my time playing games, watching movies & most importantly the Painting. Reading books is one of my best sources of inspiration.
Subscribe
Login
0 Comments
Inline Feedbacks
View all comments

Pubg Mobile Ban in India: What are the Best PUBG Mobile Alternative

Earn Extra Cashback when You Shop Anything Online Using CashKaro

Online shopping is on boom due to several reasons and one of the main reasons is the COVID-19 pandemic. No doubt online shopping has...
Read more
How to

Instagram Reels is New TikTok, Learn How to Use it.

How to Order Online from Jio Mart on WhatsApp

Recently Facebook bought shares in Reliance JIO Ltd. so people were expecting something is going to come. Amid all speculations, JIO has launched JIO...
Read more
News

After COVID 19 pandemic everyone is locked down at their homes being quarantined. Most of the people are spending time on a bigger screen...
Read more
How to

How to Use Zoom video conferencing in Android & PC

Zoom video conferencing is now a very common household name after an outbreak of COVID 19. Amid lockdown and social distancing, we are left...
Read more
Review

REACH OUT TO US

How To Download Pubg Mobile Update After Ban in India-Erangel 2.0

According to the recent news, PUBG mobile is already banned in India. And if you search "PUBG" in the play store you won't find...
Read more

Instagram blue tick is a verified badge given to the user/brand. This helps people easily find public figures, celebrities, and brands they want to...
Read more

Google has some very unique android apps specially reserved for its pixel users. These apps possess some very extraordinary features which every android user...
Read more

ABOUT US
Founded in 2019, TechScanner is an ambitious tech media startup that aims to make people’s lives better by educating them, on how to use their tech product(s) in the most efficient way possible.
Contact us: [email protected]
FOLLOW US
© 2020 TechScanner
wpDiscuz
0
0
Would love your thoughts, please comment.x
()
x
| Reply