Facebook is testing a new ‘Short Videos’ feature inside its app in a bid to cash in on the TikTok ban in India and a proposed ban in the US. This new feature shows up in the middle of the News Feed and works in a similar swipe-up manner as was popular on TikTok.

The company has also confirmed that it is testing short-form videos in the Facebook app. While scrolling feed, users will see a dedicated “Short Videos” section. On top of it sits the “Create” button, tapping which prompts Facebook Camera to launch, and users can browse through videos by swiping up. 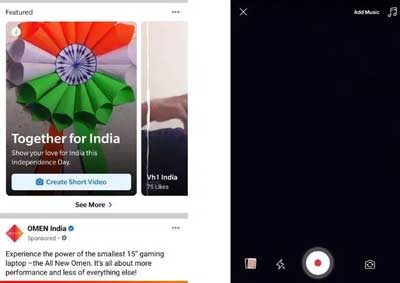 When asked for a comment, a Facebook spokesperson said via email: “We’re always testing new creative tools so we can learn about how people want to express themselves. Short-form videos are extremely popular and we are looking at new ways to provide this experience for people to connect, create, and share on Facebook.”

Also read: Instagram Reels Is New TikTok, Learn How To Use It

The ‘Short Videos’ section has a very TikTok-like interface, with likes and comments placed in the bottom right corner. There is a Create option at the top and clicking on it for the first time shows a new Facebook Camera with a description that reads, “Create and share short videos, and explore new ways to express yourself.” This new ‘Short Videos’ feature lets you add music to your recorded clip, pause, and record just like how TikTok allowed it, and share it in-app. Once posted, this video then shows up in the ‘Short Videos’ section on Facebook.

Nitesh Rajputhttp://techscanner.in
I Love technology and the way it is transforming our lives, call me a geek!! Apart from that, I spend my time playing games, watching movies & most importantly the Painting. Reading books is one of my best sources of inspiration.
Subscribe
Login
0 Comments
Inline Feedbacks
View all comments

Good news for PUBG lovers after Govt. ban on PUBG mobile including 117 other applications. PUBG mobile ban came in response to the increasing...
Read more
News

Pubg Mobile Ban in India: What are the Best PUBG Mobile Alternative

Telegram has finally added the long due Telegram Video call feature to all its alpha users both in Android & iOS. Video calling feature...
Read more
News

YouTube has released a new youtube video chapter feature for all its user on the desktop, phones, and tablets. If I am watching cooking...
Read more
How to

Instagram Reels is New TikTok, Learn How to Use it.

Instagram has finally released its short video platform Instagram Reels in India. This lets you create a short video of 15sec(max) duration video with...
Read more
How to

How to get Verified Telegram Account : Blue Tick Verification Badge

REACH OUT TO US

How To Download Pubg Mobile Update After Ban in India-Erangel 2.0

According to the recent news, PUBG mobile is already banned in India. And if you search "PUBG" in the play store you won't find...
Read more

Instagram blue tick is a verified badge given to the user/brand. This helps people easily find public figures, celebrities, and brands they want to...
Read more

Google has some very unique android apps specially reserved for its pixel users. These apps possess some very extraordinary features which every android user...
Read more

ABOUT US
Founded in 2019, TechScanner is an ambitious tech media startup that aims to make people’s lives better by educating them, on how to use their tech product(s) in the most efficient way possible.
Contact us: [email protected]
FOLLOW US
© 2020 TechScanner
wpDiscuz
0
0
Would love your thoughts, please comment.x
()
x
| Reply